The past five years were fuelled with success for the private equity industry. During these years, more money has been raised, invested and distributed back to investors than ever before in the industry’s history. Let us give some figures: between 2000 and 2019 the number of Private Equity-backed companies in the US rose from less than 2,000 to 8,000. At the same time the number of publicly listed companies fell from 7,000 to about 4,000. The US private equity industry closed a record 5,106 deals, a rise of 32% on the previous year. These deals were worth more than $803.5bn. Now you get the idea. Private investment, in general, seems to be on a secular penetration curve that has no end in sight. Launched in its dynamic, nothing seems to be able to stop the incredible rise of Private Equity as illustrated by the Dr. Pepper Snapple and Refinitiv mega deals in 2018 and 2019 valued at more than $20bn each. 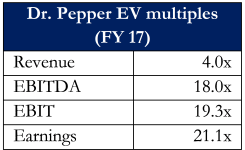 Announced at the end of January 2018 but completed in July 2018, JAB Holdings placed a bid to acquire Dr. Pepper Snapple through its portfolio company Keurig Green Mountain to create a beverage giant generating $11bn in sales revenues annually. Operating under the name Keurig Dr. Pepper, the new company’s brands include Keurig’s single-serving coffee business along with Dr. Pepper, Snapple, 7UP, A&W and Sunkist, among others. The deal, valued at c.$21bn was one of the largest private equity deals, a record that was dethroned as early as August 2019 by LSE’s acquisition of Refintiv for $24bn. As part of JAB and Keurig’s newest takeover, Dr. Pepper shareholders received $103.75 per share in a cash dividend, representing a reported $18.7bn, and will retain about 13% of the newly combined business. JAB and its co-investors, including BDT Capital Partners and Mondelez International, will invest $9bn in equity, while the $12bn balance of the transaction financing will be funded through debt from JP Morgan, BAML and Goldman Sachs. The growth of the companies has been considerable, with net sales progressing 196% to $2.81bn in Q2 2019 vs. previous year. The company has been able to maintain its Investment Grade rating from the major rating agencies S&P, Moody’s and Fitch and demonstrate a strong capacity to grow organically. In order to achieve an upgrade, the rating agency said that the company would have to successfully integrate the two businesses, produce solid operating profitability, sustain a ratio of net debt to EBITDA below 3x and show strong operating momentum. This has been achieved subject to synergies and working capital improvements and will ultimately result in an improved net debt to EBITDA leverage from 5.6x at closing to 2.8x in 2Q 19.

The blossoming Private Equity market has however been a source of controversies in the past decades, relating primarily to bumpy relationships between sponsors and beyond acceptable levels of leverage for portfolio companies. As a prime example, the 2003 CVC, TPG and Merrill Lynch takeover of Debenhams is one that still in 2019 has ongoing impacts. Debenhams’s shares were suspended in April 2019 after the company and its creditors turned down two last rescue offers from discount retail group Sports Direct, which owned close to 30% of Debenhams’ stock. Texas Pacific, CVC and the private equity arm of Merrill Lynch took control of Debenhams in 2003 and have been accused of burdening the firm with debt and making it difficult to close stores due to onerous leases.

The consortium of PE firms funneled just £600m of their own funds into the £1.8bn deal, while the rest was financed by new debt that Debenhams had to take on. Three years after taking Debenhams private, the PE houses drove for a re-flotation, with subsequent gains of more than three times the capital invested.

After gracing British high streets for over 200 years, Debenhams faced a “pre-pack” administration that will wipe out its shareholders, including Sports Direct which is estimated to have plowed at least £150m into the firm. While the Group’s holding company has gone into administration, its operating companies continued to trade as normal. The group then announced that it had appointed FTI Consulting as administrators and that they had immediately sold its operating subsidiaries to a new company controlled by its lenders, bringing to an end a four-month battle with Sports Direct and its billionaire founder Mike Ashley. The operating subsidiaries were sold to Celine UK Newco 1 Ltd, a company incorporated on March 22 and controlled by Silver Point Capital, a US hedge fund.

Although the level of debt fell after the company refloated in 2006, it held back capital investment. Debenhams was also slow to react to changes in shopping habits. It endured a particularly miserable 2018, during which it warned on profits three times, wrote down the value of its assets by £525m and its shares fell by more than 80%. Short-term thinking, chronic under investment, bucket loads of borrowing allowed the financiers to make off with bumper profits while the business was saddled with £1.2bn of debt it was never able to pay off. That debt pile prevented the firm from making the sort of investments that might have given it a fighting chance of weathering the storm that is now battering the bricks-and-mortar retail sector.

How Does Private Equity Look to Stand?

Private markets have gone from alternative to mainstream, becoming vehicles for investors to achieve exposure to various pockets of economic growth. Capital has poured in during the last years, and the industry has grown significantly, as funds look to raise capital and close deals in what continues to be a highly competitive market. Four key drivers have been identified in the upcoming growth of private equity.

The high dependency of the business to interest rates, stemming from the need for credit, loans and debt explains its subjectivity to the trends in global monetary policies. The current global economic conditions, where many countries have historically low-interest rates, is leading to capital superabundance. This does not serve PE firms looking to buy. Easy capital and competition over buying assets send prices soaring. High asset prices deter PEs from entering into a deal because companies are no longer undervalued. On the other hand, capital superabundance is a booster for sellers. IPO activity surges in a low interest rate environment. Thus, PE firms looking to exit have an opportune time when interest rates are low or declining as they can achieve higher valuation and much higher returns than anticipated. Both FED and ECB have expressed intention to maintain low-interests rate, so this pattern is expected to continue.

The strong global fundraising market continues, although more capital flows into fewer hands. Approximately $100bn was raised in Q1-2019 alone, making it one of the most successful first quarters of the past decade. At the same time, the period saw less than two thirds the number of fund closings than in the first quarter of the previous year, largely due to continuing capital concentration. With these so-called “mega funds” being raised on a more regular basis, more capital is going to be raised by fewer sponsors and dry powder in the hands of major PE houses is supposed to increase consequently. In addition, PE sponsors are expected to face similar challenges to those in recent years in terms of getting deals done, given competition for assets and high multiples.

The desire for LPs[1] to customize their portfolios, cut costs and boost returns has sparked a shift towards more bespoke fund models, such as separately managed accounts. As a consequence, the GP stakes market keeps growing. Staking funds[2] has become an attractive alternative for LPs looking to diversify their investments. Staking transactions are also appealing to GPs who wish to secure long-term capital without taking their firm public. While the 10-year limited partnership is unlikely to disappear completely, the idea that LPs are locked into illiquid vehicles for a decade or more is likely to become a thing of the past. With the rapid growth of the secondaries market LPs will have no unwanted funds that have outlived their 10-year lives. In addition, use of technology is part of a broader trend to accelerate the speed of deal-making, which will be much more rapid in 10 years’ time, say observers.

Private equity firms have to adjust to a world of continued uncertainty as trade, regulatory and political change is the new normal. Deals are going to be underwritten with some cloud of uncertainty and with that, risk mitigation and management will be crucial to maintaining fund performance. Cross-border deals may become less inviting as risk-averse funds may limit their operations to known jurisdictions. Today, a more mature industry with more tools is shaping a bright future for itself, with both an agenda for growth and better defenses against the inevitable downturn, whenever it may come.

[2] A GP Stake Fund is like a PE investor who invests in other PE firms. A GP stake deal is a direct equity investment in the GP’s underlying management company.