At the beginning of 2018, the VIX, an instrument which tracks the volatility of the S&P500, surged dramatically showing a comeback of fear among investors (Figure 1) following a period of extreme calm started after the financial crisis. 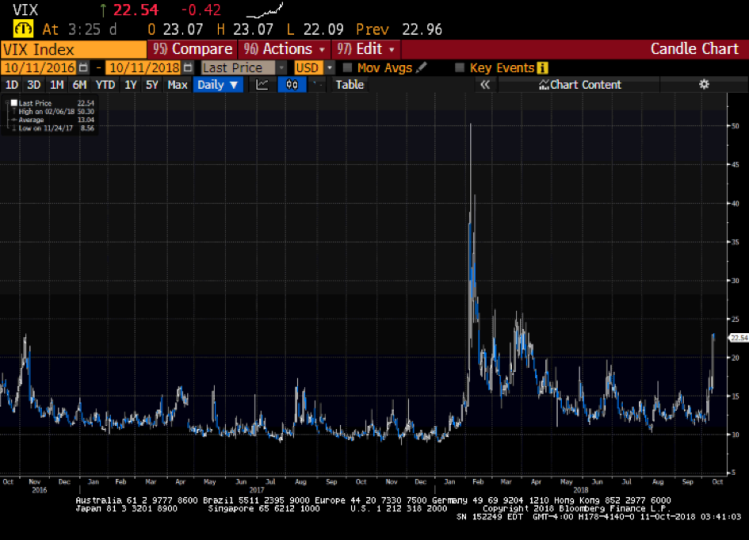 February’s spike in volatility led to further speculations about a coming correction or bear market as the end of the bull market started in 2009. Through 2018, we saw an increasing number of headlines on the coming bear market but, on the contrary, the main US equity indices kept reaching new highs without giving any signal of a downturn. However, during the week starting on October 8, the main US equity indices fell raising concerns about the beginning of a correction. On October 10, the S&P 500 swept 4% from its all-time high with the 60% of the stocks composing the index down >10% from the 52-week high, therefore in correction’s territory. Over 130 components fell at least 20%, level at which a bear market is recognised. Why did that happen?

We believe that the main drivers of the market downturn were:

On top of these drivers, on October 9, the IMF lowered its guidance on 2018 global economy growth to 3.7%, down 0.2% from April estimates. We believe that the combination of these factors together with the negative sentiment fuelled by the newsflow, triggered last week investors’ sell-off which led the main US indices down, as observable in Figure 2.

So, given the current situation, what should you expect for 2019?

We believe that 2019 will be a turning-point year for investors with the main focus being on the following topics:

After the beginning of the latest financial crisis, central banks pumped liquidity into financial markets and lowered interest rates in order to sustain the real economy suffering from a troubled financial system. The Asset Purchase Program (APP), also known as Quantitative Easing, was first started by the Federal Reserve (FED) in November 2008 and officially ended in January 2014. However, the FED waited until the end of 2015 to hike interest rates when it brought the US FED Funds Rate from the historical low of 0.25% to 0.50%. In September 2018, Jerome Powell announced the third interest hike in 2018 bringing the US central bank’s benchmark rate to the range of 2.00-2.25% (Figure 3).

Figure 3: Increasing US Funds Rate starting from the end of 2015

The comeback of higher interest rates was triggered by the concerns around rising inflation and a potential overheating of the American economy. However, apart from making financing more expensive, the tightening monetary policy impacted the bond market, particularly increasing the 2-year US treasury bill’s yield to 2.85% from the 1.92% at the beginning of 2018 (Figure 4). 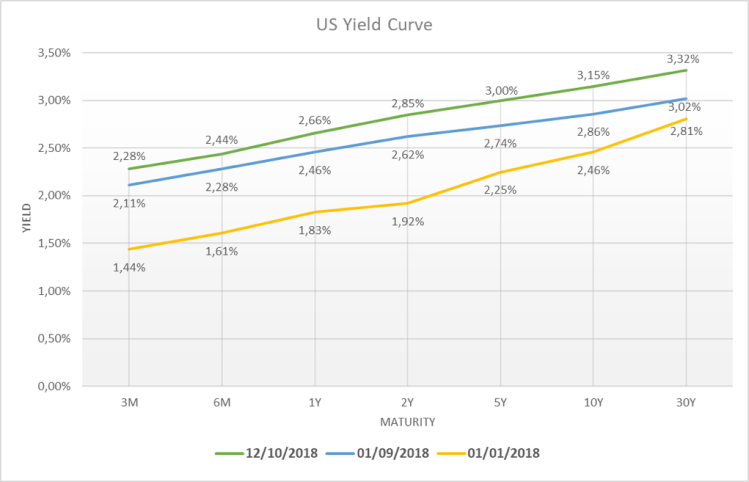 As a rule of thumb, when the yield of government bonds surges, more risk-adverse investors shift their money from stocks to bonds as they can earn a decent return carrying the risk-free US Treasury bill. This shift of capitals from shares to fixed-income products generated a selling pressure on the stock market contributing to the above-shown downturn of the main US equity indices (S&P500, Dow Jones, NASDAQ). Looking ahead, we see the shift in capital allocation likely to continue as bonds’ yields increase due to the execution of the planned interest rates hikes announced by the FED. We see Powell’s schedule to be respected with 1 more hike in 2018, 2 in 2019 and 1 in 2020, leading the US FED Funds Rate to a potential 3.00-3.25% interest rate by the end of 2020 vs 40-year average of 5.72%. On top of that, the European Central Bank (ECB) announced the end of its APP to come in by the end of 2018 and consensus expects a first interest rates hike coming in in the second half of 2019. Albeit the political tension coming from Italy, we are aligned with consensus and believe that the ECB is set to hike the current -0.25% reference rate starting from mid-2019. An increase in European interest rates is likely to fuel the shift effect, leading to further sell-offs in the European stock market.

Figure 5: US inflation rate evolution since the beginning of 2018

Source : US Bureau of Labor Statistics

On October 15, US Commerce Department released data on US retail sales showing almost-flat growth with motor vehicle spending being offset by the biggest drop in spending at restaurants and bars in nearly two years. Retail sales rose 0.1% mom, 0.5% below expectations but up 4.7% yoy. Consumer spending accounts for more than two thirds of US economic activity. Despite historical low unemployment rate at 3.7% in September 2018 and 3Q18 expected 3.5% annualized growth in consumer spending, we see a slowdown in US macroeconomic data in 2019 and 3Q18 US GDP growth around 3.00%, down 1.2% from 2Q18. Adding to this, we see Trump’s rhetoric against the FED supported by investors’ that are losing confidence in Jerome Powell. JP Morgan recently published a report showing that the market reacted negatively to all the speeches given by Powell since the beginning of his mandate, quantifying the effect of his words in a US$1.5tn wiping away effect. This shows that investors are concerned about the speed at which the FED is executing its hiking plan as the expectations on US inflation are slowing down (Figure 6) putting investors on a wake-up call.

On July 6 of this year, the US imposed 25% tariffs on US$34bn of imported Chinese goods in the beginning of what escalated to a proper trade war between China and US. On September 24, Trump’s administration imposed 10% more tariffs on US$200bn Chinese goods and China retaliated on US$60bn of US goods.

In this scenario, investors were scared of the potential effects that the neo-protectionist policies might have on their portfolio. In order to get a sense of how the trade war impacts companies, we looked at the luxury goods industry. Chinese authorities are implementing strict controls on travellers with the objective to look after imports over the duty-free allowance of CNY 5,000  (US$730). Chinese customers represent c.40% of the revenues for brands such as Louis Vuitton (LVMH) and Gucci (KERING) and a drop in purchases from Chinese customers would have a significant negative impact on the top-line of luxury brands. No wonder why on October 10, LVMH plunged 7.14% despite the company published strong results. We believe that investors reacted to the sentence of the head of Investors Relations at LVMH, Chris Holly, stating that the company is “subject to important risks and uncertainties that could cause actual results to differ materially” from previous forecasts. The entire luxury goods industry lost ground since the beginning of October, showing a more marked drop than other industries (Figure 7).

The example of the luxury industry gives a general understanding on how the trade war is already impacting equities and gives also a taste of the potential consequences that further escalations might have on the global stock market. We see the tensions between China and US to continue through 2019 leading to more industries being negatively impacted and a downward pressure on the global equity market.

The spike in oil price was mainly driven by the sanction imposed by the US government on Iran that lowered the OPEC’s member oil production to 3.4mbd (million barrels per day), down c.400,000 bpd from August 2018. Oil price is very sensitive to changes in supply/demand shifts and such a drop in supply makes oil scarcer hence increasing its value, therefore price, in the market. Higher oil price means rising energy costs for companies which will have to deal with increasing expenditures to keep the business going. This puts companies’ margins under pressure and translates into lower expected earnings per share (EPS). Therefore, investors see their expectations on dividends per share – computed as portion of EPS – decreasing and the equities’ bottom line shrinking. We see the oil price continue to rise in 4Q18 on the widening of supply/demand gap due to the uncertainty coming from Saudi capacity to cover the Iranian production wiped away by US sanction.  Also, we think it is worth to keep an eye on the development of the latest scandal on the US-based journalist disappeared in the Saudi consulate in Turkey since potential sanctions on Saudi Arabia from western countries would put further upward pressure on the oil price.

The last two weeks were characterized by the sell-off, but also by the US investment banks’ 3Q earnings releases. In the 3rd quarter of 2018, US banking sector’s results were overall positive with an improvement of the Net Interest Margin (NIM) – difference between interest income and interest expenses – thanks to the rising interest rates environment in the US. However, the IB – Global Markets divisions did not show much improvement. Indeed, results from the Sales & Trading departments of the biggest US investment banks (e.g. JP Morgan, Goldman Sachs and Morgan Stanley) delivered an overall performance below expectations. Therefore, one might draw the conclusion that investors are not exchanging their stocks for other financial products at higher frequency than last year, otherwise the level of fees should have been higher. Indeed, it seems that investors are selling their holdings without replacing those with other financial products, lowering the trade volumes hence commissions for the IB trading floors. From this perspective, one might argue that investors are taking out money from the market and building their cash piles in order to prepare for the worst-case scenario. As a corroborating factor of this thesis, BlackRock, the world biggest asset manager, had inflows below expectations in the last quarter showing a lowering investors’ appetite to put money in financial markets rather than under their mattress.

We believe that financial markets are impacted by a collection of reasons which go beyond the “Main topics” illustrated in this report. We are convinced that psychological, irrational and behavioral variables drive the market on daily basis together with financial, rational and economic factors. Therefore, we urge the reader to explore as many alternative explanations as possible when looking for reasons to justify markets’ moves.