– In 2017, Private Equity markets continued to reach new record highs with regard to capital commitment, deal valuations and number of active investors. Competition for private investments increased dramatically, largely caused by traditional asset managers shifting significant proportions of their capital into private markets. With easy access to capital and increased competition for deals, Private Equity investors increasingly experience problems to effectively deploy their capital. However, the valuation rally is expected to continue in 2018, introducing new forms of investors, so-called megafunds. –

STATUS QUO – Private Equity markets are booming: Private asset managers raised a record sum of nearly $750 billion globally, extending a cycle that began eight years ago. In addition, less traditional investors such as pension funds or sovereign wealth funds increasingly engage in direct investments in private markets due to a lack of profitable investment opportunities in more traditional asset classes. With more capital available, the total deal volume rose by 14 percent to $1.3 trillion compared to the previous year, reaching almost its record high of $1.4 trillion from 2007. In contrast, deal count dropped for the second year in a row by 8 percent. As a result, the average deal size increased from $126 million in 2016 to $157 million in 2017, a 25 percent increase, mirroring the increased competition among investors. 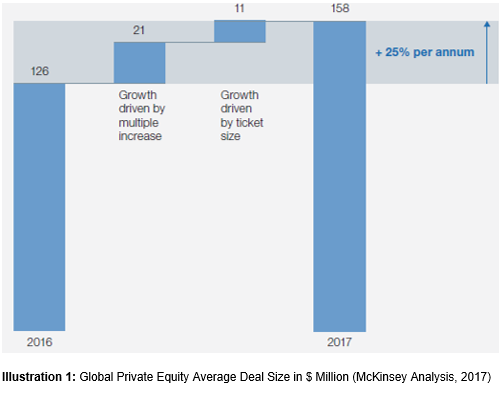 Furthermore, the Median EBITDA multiple for investments in 2017 exceeded 10x, displaying a significant increase from its previous all-time high of 9.2x in 2016. Despite record valuations, the number of exits fell for the third consecutive year, suggesting that investors believe in further value appreciation of their investments. 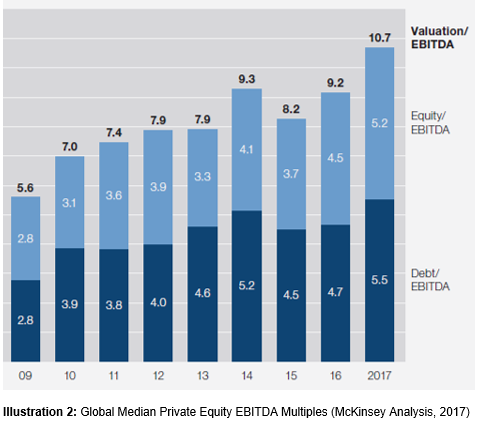 High investment performance and superior yields for limited partners attracted new types of investors, ultimately resulting in greater capital commitments and fund size: The latter can be attributed to a large part to the rise of US buyout megafunds, private blind-pool capital vehicles with assets under management (AUM) above $5 billion. The prevailing wisdom has long been that the “law of large numbers” might put a cap on megafund returns, however average returns have outperformed returns of other fund sizes consistently during the last decade. The latter was not only a US phenomenon: The rise of US megafunds was nearly matched in Europe, where several firms successfully closed big new funds totaling $40 billion, and in Asia, where megafunds—previously close to nonexistent— contributed more than $20 billion of the $60 billion raised in 2017.

Besides buyout funds, it appears that other private asset classes constitute increasingly attractive investment opportunities for investors. First, private debt markets are more and more seen as a good alternative to banks and public debt, fueled by all-time low interest rates and investor demand for portfolio diversification. Second, real-estate gained popularity following collective rent rises in major cities. While investors have historically viewed Real Estate as a source of alpha, more and more are coming to see it rather as a source of income. In a world of compressing yields, relatively low-risk assets that produce annual returns of 5 to 7 percent, appeal to many investors. Finally, infrastructure investments remain an attractive alternative for investors. Since 2016, some of the largest general partners have raised record-breaking funds for traditional, brownfield infrastructure strategies.

CHALLENGES – Due to the continuous popularity of Private Equity as an investment vehicle, new challenges have emerged, pressuring the superior profitability of the industry. Higher number of sophisticated investors, ranging from pensions and endowments to family offices, decrease the likelihood for exclusive bidding. Hence, valuations continue to approach artificial highs, which makes it considerably more difficult to reach desired return multiples. This can be mainly attributed to thriving public markets, corporate strategic investors as well as the low-cost debt environment.

The public markets are hot despite some recent wobbles, which has been driving comparables’ valuations to new heights. Furthermore, the low-cost debt environment of the past decade encouraged strategic buyers to open their pocketbooks and quickly expand through acquisitions. In so doing, they are competing directly with Private Equity for deals and pushing multiples even higher. Another factor is the ongoing availability of cheap debt, which is driving up leverage levels for company acquisition, thereby increasing the risk for lenders in case of default. The mere unlimited rise in valuation manifests in fewer investments from general partners, zeroing in on targets where they can still earn an attractive IRR. However, what constitutes ‘attractive’ is undergoing revision, as many firms lower their hurdle rates in response to higher prices. Thus, investors sit on a whopping $1.8 trillion of dry powder in 2017. A continuation of this trend over the coming years would result in a vicious circle for general partners, forcing them to further reduce hurdle rates as well as to deploy capital in situations they otherwise would not. 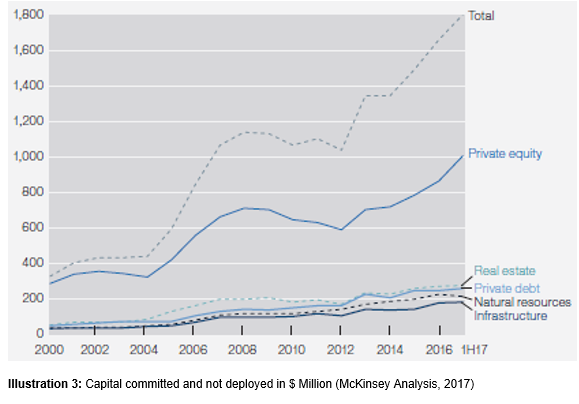 OUTLOOK – The next years will undoubtedly mark a decisive period for Private Equity as a mainstream asset class. Following the rise of megafunds, we expect to see assets to consolidate at the top of the league table, i.e. private market funds are beginning to concentrate into fewer hands. This trend will be supported by a growing number of co-investments between traditional Private Equity investors and new direct investors such as pension funds. 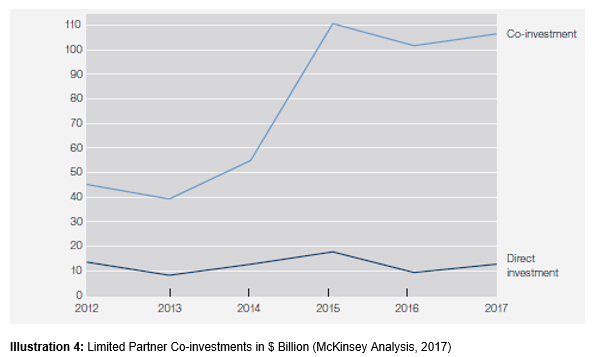 In addition, funds will aim at bringing more structure and scale into their processes to cope with the changing market environment, innovation and unconventional investment horizons. For example, we currently experience first attempts of next-generation sourcing, which aims at improving sourcing with sophisticated analytics. Funds may be able to automatically match their sourcing activities with investment criteria and their respective perception of industry attractiveness. Besides, we expect to see investors increasingly engage in active management, as digital transformation processes open up new opportunities for value creation, which cannot be realized (at least in the holding period) without major involvement of the investor.

Due to uncertainty about future interest rates and valuation multiples, Private Equity investors will increasingly deviate from average exit periods: On one end, exit cycles for investments purchased at high multiples may decrease to as little as two years, as firms cash in on multiple growth early when they anticipate that multiples will decline. On the other end, Private Equity investors allocate theirs funds to private asset classes generally associated with longer holding periods (e.g. infrastructure, natural resources, and Real Estate) due to their high value creating potential.

In summary, Private Equity will remain one of the most sought-after assets classes experiencing further growth in both number of investors and average deal sizes. However, the future will show whether today’s high valuation levels are reasonable and enable superior exit returns.