The first one is whether China’s economy can achieve its re-balance of reducing reliance on investment and increasing consumption in 2017. As the average increasing rate of 6.7% in 2016 is exactly the same as its target (at least according to official propaganda), MGA estimated, household consumption accounts for 1 point percentage more than last year, achieving 39% of the domestic nominal GDP. Even though the percentage is far less than advanced economy, it demonstrates China’s stable development since 2008’s financial crisis. 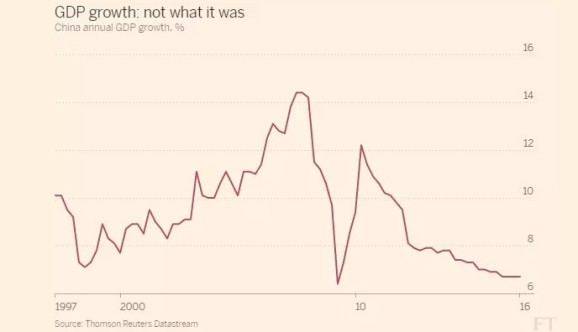 Unfortunately, China is not likely to sustain its increase of household consumption in 2017, as the household income’s increasing rate slows down from 16% in 2011 to 8%, while the dramatically climbing price of house suppresses people’s expenses.

As for the next year, The International Monetary Fund upgraded its growth forecast for China’s economy in 2017 to 6.5 percent, 0.3 percentage points higher than their October forecast, on the back of expectations for continued government stimulus.

Meanwhile, the debt market in china should be highlighted, MGA emphasized, as the ratio of outstanding obligation to GDP is approaching 265%, China’s debt market is always expanding, making the asset riskier, but it’s still quite possible to issue a large scale of debt in 2017. Chinese government set the target to issue from 11 trillion to 12 trillion RMB debt for local government (1.6 trillion to 1.7 trillion dollars)—much higher than 6 trillion in 2016—as to finish the plan of exchange local government’s debt that started in 2014.

In 2017, default of enterprises and bankruptcy are more likely to happen, especially considering Beijing is now leading reform of cutting overcapacity in some industry. 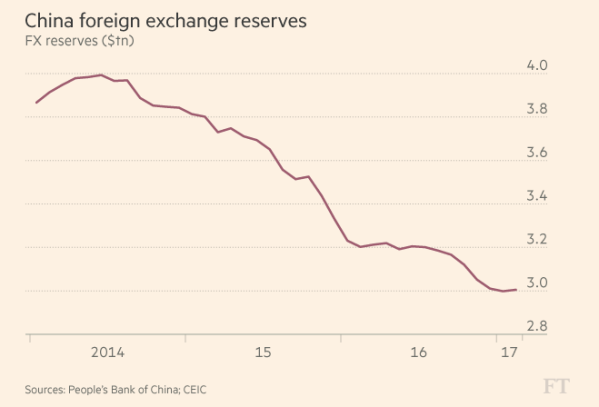 China’s foreign exchange reserves fell from $4tn to $3tn in the past three years despite a persistent trade surplus. The first month of 2017 found China’s foreign exchange reserves fall below $3tn for the first time in the past five years despite Chinese government’s tighter controls on capital outflows. In February, China’s central bank managed to raise the reserves to $3.01tn. This first raise after an 8-month declines in a row indicates Chinese government’s resolution in setting a safety line for its foreign reserves, although there is no consensus on the bottom line number yet among experts familiar with the topic.

Trading Economics forecasts China’s foreign reserves to continue falling below $3tn for the next quarters of 2017. The publication expects the country’s foreign reserves to remain around $2.84tn by 2020.  In the meanwhile, the country’s central bank chief said in a press conference that such decline is a normal phenomenon because the nation does not want that much forex reserves. Despite the decline, China still holds the largest forex reserves in the world, much higher than the runner-up, the chief commented.

State Administration of Foreign Exchange(SAFE) said that China’s foreign reserves will gradually stabilize despite the uncertainties in the international financial market. With China’s growing economic momentum, there will eventually be less control on capital outflow.