Trump’s victory in November led up to sudden changes in financial markets. Firstly, the fiscal spending he promised has led to higher commodities price as the US government will ask for more commodities to build more facilities. The future tax reduction under Trump’s administration results in repatriation of dollars that strengthens the US currency. The trade tariffs that Trump wants to implement with US commercial partners will have a negative impact on exports of some emerging countries including China and Mexico. Above all, this fiscal stimulus will create inflation that the FED is trying to control by hiking its targeted interest rate from 0.5% to 0.75% knowing that higher interest rates causes lower bond prices. Since the US election in November roughly $3trn have moved from bond markets to stock markets[1].

Two of the most important factors hurting bond prices right now are then the fact that inflation is picking up in most places and thus major central banks have stopped trying to lower interest rates.

To have a deep understanding of bond activity after American election, one should analyze accurately the FED policy since the election. Indeed, the FED has the power to change interest rates that are largely determining bond prices. Since the election, we have noted that expected inflation is going to be higher than its current level for several reasons. First, Trump’s fiscal and budgetary policies are simulative policies that aims to revitalize the US economy. Moreover, wages are going up in America[2] and that means that people getting jobs in December are more likely to spend money in the following months. This expected high inflation leads the FED to hike its targeted rate in December in order to maintain inflation at the target level of 2%. In a nutshell, the expected high inflation in the following months gave rise to the decision of the FED to hike interest rates. This increase of interest rates led the American bond market to collapse after American election.

Trump has reached the goal of FED: steepen the yield curve which makes banks more willing to lend money, injecting directly real economy. Regarding figure, it should be noted that on the 10-year Treasury bond jumped from 1.73% to 2.36% and reached a peak of 2.60%; the yield on the 2-year bond rose from 0.78% to 1.12% and the 30-year yield curve accounted the steeper curve and the largest changes from 2.56% to a peak of 3.19% in December.

The 3 most common drivers of decreasing bond prices and increasing yields are faster growth, higher inflation and rising short-term rates because government bonds embed the risk premium of the issuer and expected inflation. Firstly, the rationale behind the shift is the belief that fiscal stimulus will boost economy through tax cuts and infrastructure spending. Consequently, not only the Federal Reserve will be allowed to return monetary policy to more normal levels by pushing up rates by a quarter point on December 14th, but also inflation is expected to raise in the medium term.

“It is something fundamental that has changed”, says Richard Turnill, Global Chief Investment Strategist at BlackRock, “important shifts around real growth, around inflation, around policy all suggest that the move in bond yields we are seeing now can be sustained. I believe we have seen the lower point for yields.” Nevertheless, there is uncertainty on how much of Trump’s program will be implemented, on whether economy will grow due to the president’s aim of pursuing a protectionist agenda and on inflation rebound.

In previous rising rate periods, corporate bonds have tended to outperform government bonds because it has been a combination of a positive return for equities as well since the spread compression and additional interest received from owning corporates can help to provide a return buffer in a portfolio. Under Trump’s presidency, US corporate credit sector should benefit from growth opportunity in a more business-friendly environment and a positive supply-demand dynamic.

The Trump’s tax reform and the interest rate rise in December by the Federal Reserve have positively affected investors’ expectations on faster economic growth and on implementation of a deregulatory regime. According to a report from Financial Times (FT), 11 companies and banks sold a record amount of $19.9 billion in debt in the US on the first trading day of 2017. 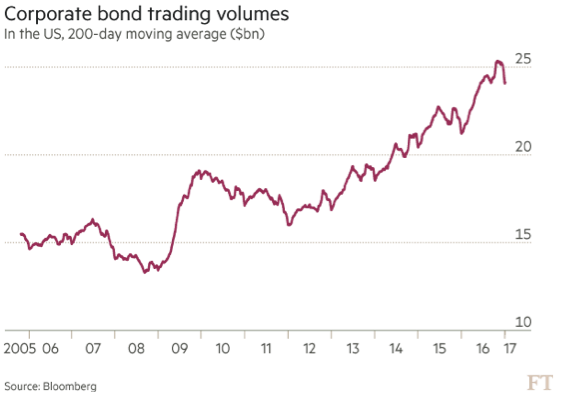 “Expectations around fiscal spending and loan demand, lower taxes, and lighter touch regulation have coupled with actual fundamental improvement to drive the space,” said John Moran, banking analyst at Macquarie. Nevertheless, the uncertainty and concern over Trump’s program has led many companies to postpone their bond issuance in the second quarter if they use their financial statement or delay until the second semester of 2017. Nevertheless, blue-chip high-grade Microsoft, AT&T and Apple raised a total $ 37bn in the first week on February.

Corporate tax reform could play a crucial role, not only in the form of lower rates, but also to the effect on technology and pharmaceutical companies holding sizeable cash balances offshore. This accumulation of cash outside of the US has coincided with high debt issuance from both sectors. Apple has over $ 200bn of cash, yet borrowed around $ 20bn in 2016 and $ 10bn in 2017 to buy back stock and pay higher dividends, if they pay a one-time tax of 8% to 15% then they can bring this money back to the US.

According to Matt Brill, portfolio manager at Invesco Core Plus Bond Fund, technology giants like Cisco (CSCO) , Oracle (ORCL) , as well several big pharma companies, will borrow less in 2017 compared to 2016, if Trump’s tax reforms are enacted. Moreover, he estimates investment-grade bond supply could be reduced from $1.3tn in 2016 to between $1.1tn and $1.2tn in 2017.

Furthermore, 2016 has been the year which has highlighted the political risk also for bond investors in developed countries. After a long period of predictable policies, the rise of Western extremist politicians brings the risk of extreme outcomes with uncertainty of consequences. On one hand, the Brexit vote caused yields decrease, on the other hand, Trump’s election caused was followed by an increase. Consequently, government bond investors may be more aware that most long-dated bonds annual returns are no more secure as they used to be.