While the European political cohesion remains still under scrutiny, with the Brexit referendum approaching and the Pound heavily depreciating over Euro (3M -6,59%), the majority of European financial institutions are still underperforming due to their extensive portfolios of Non-Performing Loans (NPLs). In fact, following a recent analysis of EBA, it resulted that roughly €1 Trillion of NPLs are currently held by European institutions, almost equivalent to the entire Spanish GDP.

Countries including Italy, Spain and Portugal are the ones mainly affected by the crisis of the deteriorated credit and the future perspectives do not look brilliant. In fact, the lag between real economy recovery and the decline in credit risk still remains consistent as GDPs growth is below pre-crisis levels. Such a complex scenario, it is ideal for the Alternative Investment industry that has the resources and the expertise to exploit such an opportunity. Several US Hedge funds, including but not limited to Och Ziff, Centerbridge Partners and Monarch Alternative Capital are expanding their London-based staff to increase their exposure to European distressed assets.

The NPLs markets within Southern Europe, however, have their own differences. For instance, the Spanish market is preferred by international players, including Blackstone, for its relative high ratio of foreclosure within 2 years, especially when compared to the Italian market where the majority of homeowners decide to go to court, thus delaying the asset acquisition. For the above reason, the Italian landscape presents several independent hedge funds such as Algebris Investments, with its brand new Italian NPLs fund, that have a more meticulous knowledge of the Italian market. 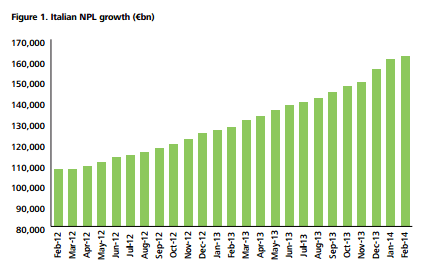 The extremely attractive returns generated through distressed-debt funds, however, are not accessible to retail as alternative funds are only available to institutional investors, with a minimum investment of €500.000. Although, several experts do believe that the future will bring drastic changes as the AIFMD has begun a regulation process of the European alternative industry and it is not to be excluded that alternative funds might be offered to retail clients soon.