The Kraft Heinz Company is an American worldwide food company formed by the merger of Kraft Foods and Heinz in July 2015, backed by 3G Capital and Berkshire Hathaway. The merger has been agreed by the boards of both companies, with approvals by shareholders and regulatory authorities. Alex Behring, 3G Capital’s managing partner, becomes the chairman of the new company; Bernardo Hees, Heinz’s chief executive officer (CEO), is now the CEO of the new company; and John Cahill, Kraft’s CEO, is now the vice chairman of the new company. The company will have dual headquarters in Pittsburgh and Chicago, the respective headquarters of Heinz and Kraft. The company and its stock are both fresh from the oven, but in their current forms, they have been in the works for some time.

Arguably, this entire process started with the high-profile buyout of H.J. Heinz by Warren Buffett and Berkshire Hathaway in conjunction with 3G Capital. That deal happened in 2013, with Berkshire and 3G Capital agreeing to purchase the condiments maker for a base price of roughly USD 23 billion, representing an approximately 20% premium to Heinz shares prior to the announcement.

Since the merger, Kraft Heinz reported combined results for the first time this quarter. It reported net sales of USD 6.4 billion. This was a fall of 9% compared to the same quarter a year ago. The organic net sales fell by 2% compared to 3Q14. A negative 8.2 percentage point currency effect caused the adjusted EBITDA to fall by 3.4% to USD 1.5 billion this quarter. The adjusted EPS (earnings per share) fell by 4.4% because of the change in the adjusted EBITDA and the impact of a higher tax rate compared to last year.

On November 5, 2015, Kraft Heinz reported its third quarter results for fiscal 2015. The combined results after the merger were not good. As a result, the stock price took a toll on the disappointing quarter. The stock fell by 5% after the earnings release. It closed at $72.01 on November 6. The fall in net sales was primarily due to a negative 6.7 percentage point impact from currency and a negative 0.3 percentage point effect from divestitures. The volume or mix fell 2.7 percentage points because of lower shipments in ready-to-drink beverages, food service, cheese, and boxed dinners in the US and Canada. However, the rest of the world showed strong growth. The merger seems to have benefited the company despite the disappointing results this quarter. The company has shown various synergies among its brands including Kraft, Heinz, Capri Sun, JELL-O, Kool-Aid, Lunchables, and Maxwell House. 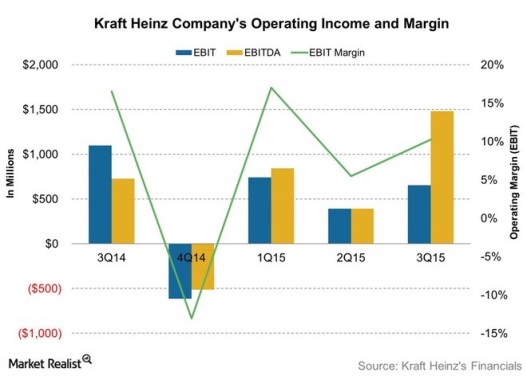 As per the company’s press release, on July 31, 2015, it paid a cash dividend of $0.55 per share to all stockholders of record at the close of business on July 27 2015. This dividend was in lieu of the dividend declared on June 22 2015, by Kraft to its shareholders of record as of July 27 2015. The payment was conditional on the merger not having closed by that date. Kraft Heinz (KHC) in 2Q15 reported diluted EPS of USD 0.92 compared to USD 0.80 for the same quarter last year due to higher spending on cost savings initiatives and costs related to the merger with Heinz. These costs were partly offset by gains on an asset sale. The adjusted EPS was reported as USD 0.98 in the 2Q15. The EPS consensus estimate for the third quarter was USD 0.58. Yet Kraft Heinz reported an EPS (earnings per share) of USD 0.44 in 3Q15. It fell short of analysts’ estimates by 24%. It missed the EPS of USD 0.62 on revenue of USD 6.7 billion, according to the analysts’ forecast. The EPS fell by 41% compared to 3Q14. It fell 52% compared to 2Q15. The analysts that follow this company are expecting it to grow earnings at an average annual rate of 10% over the next five years. Analysts expect earnings growth of 12.6% next year over 2015’s forecast earnings.

K.H. Co’s competitors in the industry include Mondelez International (MDLZ), Hershey (HSY), and Mead Johnson (MJN). They reported gross margins of 39%, 45.5%, and 64.5%, respectively, for their last reported quarters. Kraft Heinz’s competitors such as Mead Johnson (MJN), McCormick & Company (MKC), and Keurig Green Mountain reported operating margins of 23.1%, 13.1%, and 16.6% in their last reported quarters.

Demand is driven by food consumption, which depends on population growth. The profitability of individual companies depends on efficient operations, because products are commodities subject to intense price competition. As consumer demand for local, organic and fresh foods continues to grow, the enormous multinational firms that are collectively being called “Big Food” are in the position of having to rework, reshape and reimagine themselves. Although this changing consumer landscape has contributed to lacklustre growth among some of the industry’s major players, the consensus among producers, analysts and healthy food advocates is that the major food companies – and their influence – are still going strong. The issue isn’t profits, it is growth. Consumers’ growing appetite for foods that feel healthier, fresher and less processed is one of the significant obstacles to growth. At the same time, while fresher, healthier foods may be grabbing more room in the line-up, there is reason to believe that the appetite for convenient packaged foods remains strong. Kraft’s Q4 2014 earnings release points to increased sales of Lunchables pre-packaged lunches and “ongoing growth in bacon” as key factors driving higher revenues in its refrigerated meals category. The future is uncertain. Lash points to Kellogg and Campbell’s as two companies that have struggled. Kraft, on the other hand, has been doing a good job refocusing its marketing efforts. Companies compete largely based on cost and their ability to distribute the finished product. Large companies have economies of scale in purchasing and distribution. Industry is concentrated: the 50 largest companies account for more than half of industry revenue. The food processing and packaging industry is poised for growth in the coming years.

3G Capital, a Brazilian private equity firm, and Warren Buffett’s Berkshire Hathaway contributed to the merger by investing USD 10 billion in the deal together, making the Kraft Heinz Company worth around USD 46bn.

In addition, changes to the operations strategy can also contribute to cost savings. These could be targeted at reducing headcount, shutting down less efficient manufacturing facilities and implementing zero-based budgeting. Zero-based budgeting means that the managers have to explain every forecast expense for the year from scratch, without appealing to previous years’ trends. This helps the top management enforce a more stringent form of cost control and realize cost savings. Since the chairman-CEO team at the new company will be the same as that which implemented drastic cost cutting measures at Heinz, including a reduction in force of 4%, closing several factories and grounding corporate jets, there is reason to believe that the projected changes to the combined company’s operations strategy would be successfully implemented.

Berkshire and 3G Capital Company together invested around US$10 billion in the deal, making Kraft Heinz worth about US$46 billion. Buffet and his partner 3G are paying a significant amount of money in order to obtain the majority stake of 51%, in particular they are paying:

– USD 18 bn, equal to half the Market Cap of Kraft before the transaction

– USD 14 bn, equal to half the purchase price Berkshire and 3G Capital paid for Heinz in 2013.

The implied deal worth around USD 45 bn

The combination of the two food companies companies pursues intensive synergies objectives among which the majority will be pursued through cost cutting.

3G Capital Company has proven effectiveness in operational improvement and cost optimisation, as it happened at Heinz 3G will probably replace a part of the management team and employ zero-base budget in order to justify every budgeted expense. Those moves, as happened for Heinz, are intended to drive rising adjusted profits and therefore increasing shareholders return. The expected cost synergies should be around 1.5bn $ by the end of 2017 and will include intensive job cuttings and plant closures due to the overlying operations in North America. The company started in this direction by cutting 2,500 jobs also due to the changing taste of customer, more health conscious. Other cost savings could possibly come from the enlarged business and therefore the increased bargaining power towards suppliers as well as clients, such as retailers and therefore a wider presence on the shelfs.

The company will probably try to leverage some revenue s synergies, among which the common distribution channel and the geographic presence.

The Kraft Heinz Company will have to decide how to handle the geographic business distribution, on one hand Heinz’s sales are mostly generated outside the US with a remarkable portion coming from the Emerging Markets that contribute for the 25% of sales; on the other Kraft produce nearly almost all of its sales within the North American market. A spontaneous idea would be to boost Kraft’s sales in Europe, but this is in part limited by the agreement with Mondelez Int., a spin-off separated from Kraft in 2012.

Both Berkshire and 3G stated that they have long-term projects and objectives therefor they intent to stay shareholders of the Kraft Heinz Co. in the long period. This is understandable because they have paid a consistent amount of money in order to obtain the 51% of the new company and they will need time to justify their investment.

Bernardo Hees, CEO of the newly formed Kraft Heinz, said, “The job cuts are not surprising, given the reputation of the company’s management on Wall Street.” Hees also stated that he has overseen cost cutting at Heinz, representing 20% of the workforce, since it was taken over in 2013 in a prior partnership between 3G and Berkshire. The 3G Capital Company is well known for its tight cost controls, meaning the cuts announced on August 12 mostly affected people on the Kraft side of the business.

According to company spokesman Michael Mullen, the job cuts were part of the company’s process of integrating the two businesses and designing the new organization. The company expects that this new structure to eliminate duplication to enable faster decision-making, increased accountability, and accelerated growth.

Wednesday the 4th November the Company confirmed that they could cut 2,600 jobs and seven factories over the following 12/24 months.