Shadow banking refers to the whole range of intermediaries that intermediate credit through complex funding techniques. Unlike the traditional banking system, which is shielded from runs because of insurance guarantees, the shadow banking system entails a very high level of risk. This very risk gathers momentum regarding the size of the system. Arguably, it is estimated in the US to be around 20 trillion $ whereas the bank credit running barely represents the half.

Thus, how do shadow banks serve a critical role in our financial system and how far should they come under regulators scrutiny?

It is well known that traditional banks perform credit intermediation as well. Nonetheless, the main differentiation consists in the process involved. The shadow banking intermediation is a daisy chain of non-bank financial intermediaries as shown here

As a result, this process transforms risky and long-term loans into money-like liabilities, reducing through a complex procedure the credit risk that can stem from them. What was once performed under one roof in the traditional banking system is now done over a broad array of specialized entities that are not vertically integrated.

The popularity of shadow banking has grown vividly: allowing more freedom in setting flexible lending rates, broadening access to credit and even funding the private sector.

These intermediaries (hedge-funds, private equity entities e.g) play a gap-filling role left by banks in the market and deliver important benefits for the economy: need of liquidity, risk transfer, and maturity transformation.

However, the shadow banking system remains outside the scope of regulators and has prompted serious concerns.

Because of its reliance on short-term funding, shadow banking is very likely to amplify financial shocks in case of liquidity mismatch. Reforms are highly needed to make shadow banking sounder and more resilient. The final objective is to implement incentives so that risk is properly allocated and managed. So as to bring securitization under the regulatory umbrella, finance specialists suggest the creation of NFB’s (Narrow Funding Banks) that would be the only entities allowed to purchase ABS and would benefit from government insurance just as depository banks. For this matter, NFB’s portfolios would be monitored to prevent runs and mitigate financial stability.

The urgent matter nowadays is to rethink the shadow banking system; to shape it into a strong market-based financing that will sustain economic growth without breaking the rules of regulation.

In China, the shadow banking issue is very acute. The amount of leverage has grown tremendously and here is why. As a matter of fact, traditional banks rates are highly regulated, thus higher rates were generated through the shadow banking system so as to attract investors. Borrowers also went to shadow banks because banks would offer only unattractive short-term funding or turned down million of Chinese requests for loan. Shadow banks have not the capital requirements imposed by the People’s Bank of China. 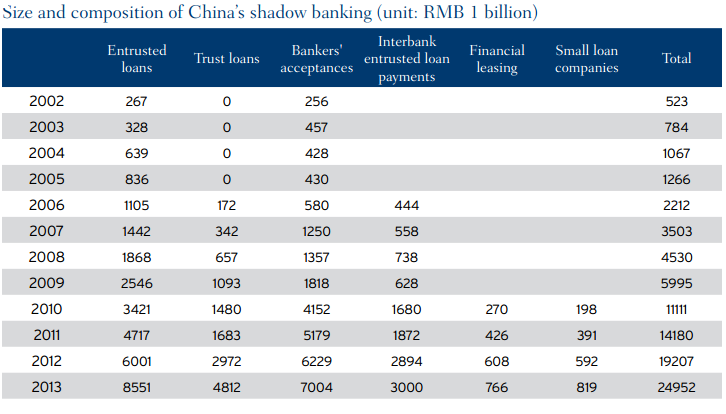 This being said, the shadow banking system lent banks billions of dollars to invest in stocks, expecting a high return. Nonetheless, the return on stocks wasn’t high enough to pay what was promised. The whole Chinese economy is deeply threatened by such mechanisms. A Chinese “Lehman moment” might loom ahead.

2 thoughts on “Shadows at the horizon – Breaking through Shadow Banking”